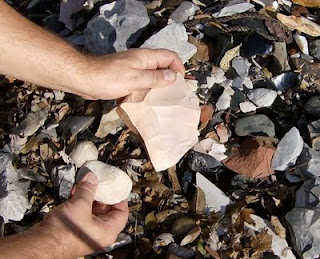 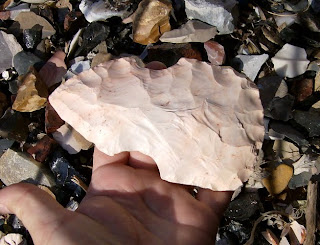 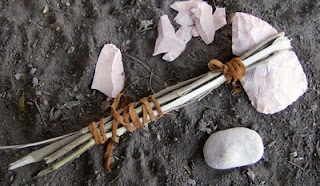 I've made a number of axes before and  it can be time and labor intensive.  Some of the first axes would have probably been angular stones used as is.  At some point, early man learned to take a few flakes off a cobbles edge to create a handheld chopper, and later developed a refined handaxe.  Adding a handle definitely increases its efficiency.  Flaked stone axeheads were followed by the advent of pecked and ground grainier stone heads, with a hafting groove,that were worked to a fine polish.  This same peck and grind technology was used to make celts, basically ovoid axeheads that were wedged into a hole that was coal burned or chiseled in the axes handle.  This all said, I was reading a piece by John & Geri McPherson, who have been and done in the primtive living field (See their website at:  http://www.prairiewolf.net/ ).   He was demostrating a  quickie hafting technic he uses on flint axes.  Intrigued, I went out to the rock pile and selected a spall and hammerstone.  In half and hour I had an axehead with hafting grooves chipped into it.  In about 15 minutes, using some of the sharp debris flakes I cut several supple shoots, and wrapped & tied the shoots on using a couple of strips of hide.  Fast, simple, and efficient...and seems to work as well as my pecked and ground axes that took 30-40 hours to make.