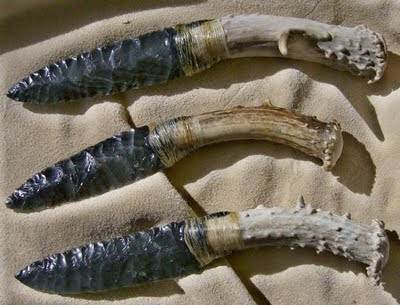 Spring finds me doing some knapping and making knives, processing sinew, and continuing to experiment with the marcasite and flint firemaking. Sometimes I get off work and have to fire up a bow drill hot coal just to smell the aroma of smoldering yucca. I've been anxious to get out and sleep under the stars, but family commitments have kept me busy. 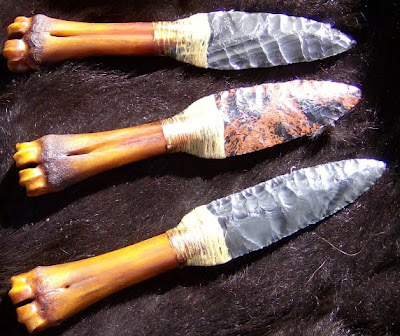 Perhaps not the best picture. I've been intrigued with this style of stone knife since I saw examples of it on display at a stone age fair. 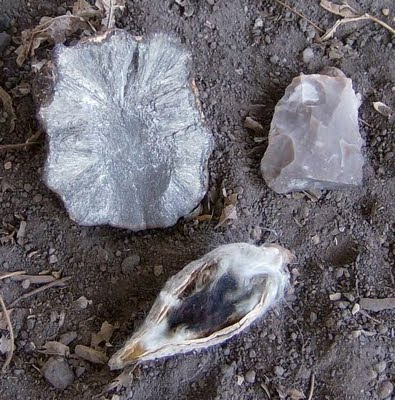 Decades ago, I remember looking at an old library book, that had a line drawing of a round nodule with a groove in it. It said it was one of the oldest artifacts, from Europe, of a piece of iron pyrite that was used in fire making. Over the years I had tried banging rocks together in an attempt to understand this method. Refining my understanding, I've come to understand that the form of pyrite used is what is called 'marcasite'. There are various forms of iron pyrite with varying crystal formations. The type here has a crystal starburst pattern. I received this piece, in the mail, from Storm in 2008 shortly before he passed away. You can see his work at: www.stoneageskills.com . I came across an article online that kind of put it all together for me, by Susan Labiste, on the Primitive Ways website at: http://primitiveways.com/marcasite%20and%20flint.html . Great researched article and video...check it out. Al Cornell also had an article in the Spring 2008, Bulletin of Primitive Technology, concerning experimenting with various natural spark catchers. The tinder, or spark catcher, is key as the sparks made by scraping the marcasite nodule with a sharp edged flint are very small and almost imperceptible. In truth, every time I wanted to try this technic I had to go into a darkened area so that I could see the sparks and tinder catch. I do not know if I could do this in the light of day very well. Almost all the time when I read about this technic, tinder fungus was used. As I did not have this, I slowly learned that I could substitute other natural materials. Ultimately, I have been having success with cattail or milkweed seed down. I roll this between the palms to condense the fibers into a mat. Also, I have added rotted punk wood finely crushed to the down to help grow and spread the coal once it catches. In the picture is a milkweed pod with smoldering down in it. I kind of stumbled onto the idea of rolling the seed down, and then replacing it in the pod. I strike the sparks onto the down in the pod. When it catches, I have lit a dry piece of punk wood with the smoldering down, and transferred the punk wood into an awaiting tinder nest to be blown into flame. The pod, I simply fold over and smother the coal, leaving me charred down in it own carrying pod for the next fire. This technic has taken years for me to put my mind around, connecting all the dots, ...and thanx in great part to Susan Labiste, Al Cornell, and Storm.
Posted by Mark at 5:16 PM 4 comments: 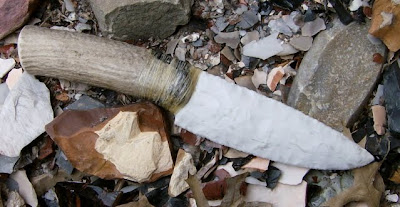 Finished another stone knife, nice and sharp,...have the cuts to prove it. My posts have been sporadic over the past year as I have had to make some different choices of how I use my time. Primitive skills is still an ever present passion though. I have more ideas of projects I would like to do, than time and energy to carry them out. I have been playing with fire making with a marcassite nodule. The challenge is finding the right natural material to serve as a spark catcher, as the sparks are quite small. But I did come across an interesting article in the Bulletin for the Society of Primitive Technology. Al Cornell was addressing this same subject of spark catchers for flint and marcassite firemaking. So, I have my next project to work on, in between flintknapping sessions, and will report on this later. 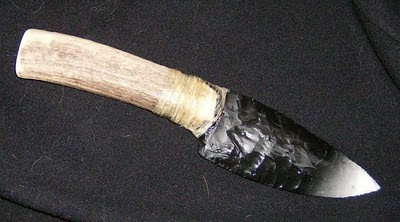 This is the latest stone knife of two-toned novaculite with an elk antler handle. Slowly, but surely I am dusting off my primitive skills endeavors. Hit the woods last weekend to check it out and do some gathering of odds and ends. 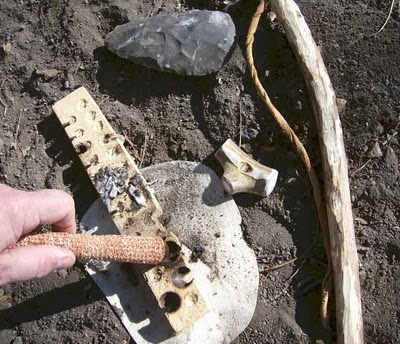