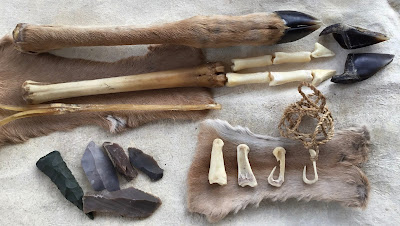 Making a bone fishhook from the phalanx bone of a deer leg is tedious work requiring scoring, drilling, and scraping.  “Actually, fishhooks were used more sparingly than might be expected. Hooks aren't always as efficient as other techniques of catching fish. This is true today just as it was thousands of years ago. For instance, special events in weather such as receding flood water might supply a community with an easy catch of fish if they are concentrated in small pools. The fact that fishhooks weren't the main choice of ancient cultures for catching fish has been proven from the excavations of archaeological sites around the world. Many of these sites may produce large amounts of fish bones but few or no examples of fishhooks.” -Peter Bostrom
Posted by Mark at 5:13 PM