Digging sticks were a common tool of the hunter gatherer, used to harvest roots & tubers.  In 2012, archaeologists excavated 39 pieces of digging sticks dated to around 170,000 years old.  Neanderthals peopled this site in Tuscany, southern Italy, called Poggett Vecchi.  Made of tough boxwood, the staves showed signs of burnt film, and cut & scratch marks.  Scientists recognized the use of fire as a tool to scorch the bark, so that it could be more easily scraped off with stone tools.  One end was charred and rounded for a handle, the other abraded into blunt point.  Experiments to remove bark, round the handle, and abrade the tip proved difficult, with stone tools, on the uncharted fine grained hardwood.  In an effort to understand this woodworking technic, I worked two staves of dried burr oak I had on hand.  One I worked solely with stone tools.  Their other, I utilized fire to char the bark and ends, for finishing with stone tools.  What did I learn?  (Forth coming) (Pictures from online) 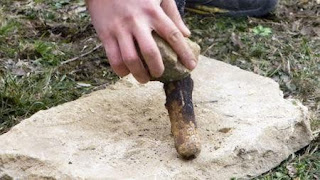