I used to say I hoped to grow up to be a caveman, in that vein:  There was a paper published, in 2016, in Scientific Reports, by Dr. Peter J. Heyes.  I’m not sure how I stumbled upon it a week ago.  Archaeologists excavating Neandrathal sites, in the Dordogne region of SW France, catalogued hundreds of curious manganese dioxide blocks.  Originally, they were thought to be used as black mineral pigment.  But, researchers recognized the availability of charcoal and soot were so much more accessible, and looked to other reasons for the quantity of blocks at the Neandrathal sites.  Some stones showed abrasion marks, and a grinding stone was found at a location.  Researchers found and tested manganese dioxide from the region, and some of the cave blocks, and speculated they might have been used to facilitate fire making.  They are not sure how they produced fire, but reason it may have been from striking stones together (marcaste & flint?). To facilitate fire making, they found manganese dioxide powder, mixed with wood shavings, acted as a catalyst and lowered  the ignition point of the shavings 100 degrees C./180 degrees F., and promoted charring.  You can read the article at :  www.nature.com/articles/srep22159.  I tried igniting yucca shavings found on damp ground, and shavings rubbed with manganese dioxide.  I found that the rubbed shavings did ignite and char more sustainably.  There was a difference.  (It would have to be added to a tinder nest and blown to flame.).  What does this mean?  1.  Neanderthals were more cognitively advanced than thought.  2.  As a primitive skills enthusiast - maybe not as much, though dry cell batteries, dis-assembled with a screw driver, yield an amount of manganese dioxide, there are other options available. (Pictured:  manganese dioxide ore/powder/ yucca shavings;  blocks from site;  YouTube beech shavings, with m.d., smoldering.) 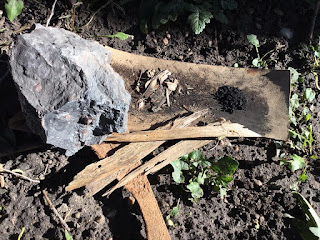 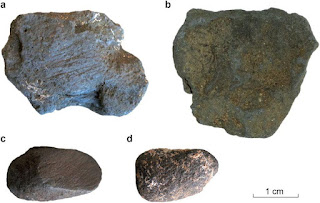