Evidence of Atlatl in N.A.

Paleo Indians, in North America, used darts and atlatls to hunt big game such as mammoths and giant ground sloths.  Most of us naturally assume this, but archaeologists studying microscopic fractures on Paleo-Age stone points have been able to determine clues for “high velocity, mechanically propelled impacts.”  It is largely thought that early inhabitants did not have the bow & arrow, so atlatls were used to hurl long, stone tipped darts for hunting.  Also, some evidence of atlatl use come from finding banner stones - weights attached to the atlatl to increase its effectiveness by giving mass and balance to the weapon system.  Studying hundreds of Paleo Indian era points, researchers calculated fracture velocities related to spear thrusts, as opposed to a thrown javelin, or atlatl or bow strike.  Different velocities create distinct telltale fractures.  The study cited atlatl & dart use around 11,000 years ago in North America.  In the Old World it was calculated atlatl use began about 20,000 years ago.  The value of the research is helpful to show when these technologies emerged and how they traveled across the continent. 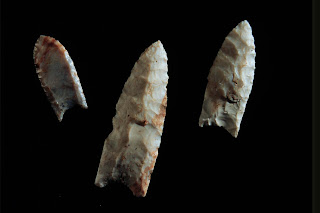 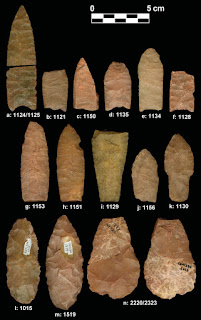 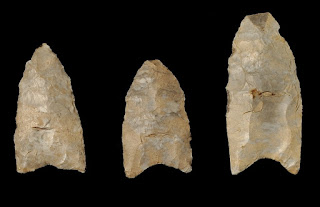