Dana Kern made a comment on a previous post on the Schoningen spears, a set of six wooden pointed javelins, dating back to over 300,000 years ago, asking why there were no stone tips?  The archaeological record shows numerous stone spear points after the 300,000 year mark.  In fact, researchers excavating the Kathu Pan site in Southern Africa have found a spearpoint potentially dated to around 500,000 years ago.  They ascertain it is a spearpoint by studying the tip fracture to other known spearpoints.  Of course, continuing study is going into this.  Early man recognized the greater effectiveness of sharp stone spear tips in taking game.  But, the whole process of hafting, attaching a point to a shaft, is a complicated subject.  Fore thought and planning have to proceed making a spear.  The use and ability to control fire is necessary to produce an adhesive filler if used.  Making a suitable notch and binding it with plant cordage or animal hide or sinew, is key to producing a sufficiently strong haft, that will hold when facing potentially dangerous or cornered game.  Scientists also recognize the importance that language plays to communicate the ideas and methods to make spears and coordinate hunts.  Of course, you can’t forget the skill to produce a stone point is paramount.  This doesn’t answer why the Schoningen spears did not have stone tips.  But, but hopefully we can recognize what a technical achievement the act of fastening a stone to a wooden shaft is. 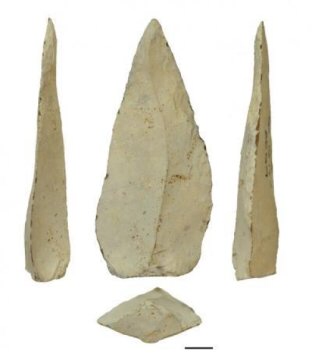