In April of 2017 a paper was published from the excavations in Sibudu Cave, in KwaZulu-Natal, a province of South Africa.    25 stone points were unearthed with the telltale signs of an emerging new technology for working stone...pressure flaking.  Evidence pointed to the use of a sharpened bone to push against the edge of a stone blank to remove small flakes...sharpening, thinning, and shaping stone points.  This technic allowed more control over the finished tool.  These artifacts were dated at around 77,000 years old.  In Europe, pressure flaking on stone tools was documented about 20,000 - 25,000 years old.  There was evidence that a number of these tools had been hafted on a spear or dart from the glue residue.  Fourteen of the 25 points had impact fractures and wear indicating they were used for hunting.  Because of the excellent conditions of the cave in preserving these artifacts, animal residue, blood and bone fragments, plant fibers and residue were also identified. 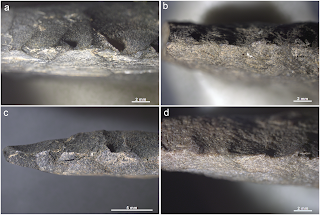 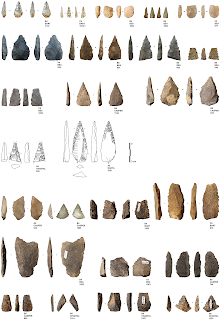