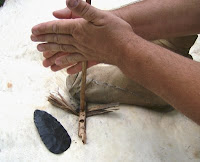 Millenia ago, when man crossed the landscape, all he had to depend on were his wits and the resources that nature provided. He learned to fashion sharp knives and spears from the stones of the earth. Buffalo and deer provided food, clothing, and shelter. He watched the ebb and flow of the seasons to take advantage of natures bounty. Some Native American traditions reasoned that the trees absorbed the heat from the Sun in their limbs, and that thru the fire ceremony they were able to release it from the wood.
Fire was a sacred element- it was life itself. It cooked your food, gave light and warmth to your shelter, and kept bothersome insects and predators at bay. Fire was useful in the manufacture of tools - bending or straightening shafts, baking clay into pottery, or coal burning bowls or spoons. Larry Dean Olsen said that most of human history was made by people sitting around the hearth fire.
Posted by Mark at 9:18 PM

Have you done much coal burning to make bowls and spoons? That is something I want to try, I just haven't made the time yet.