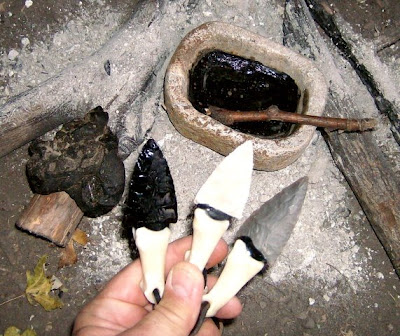 Asphaltum was one of natures resouces used anciently as an adhesive and waterproofing for hafting, baskets, and canoes. Found where crude oil seeps to the surface, the light fraction of oil evaporates, leaving a heavy sticky tar. Most notably, the La Brea tar pits of California, was used for thousands of years by the local Native inhabitants. Knife artifacts, hafted with asphaltum, have been found originating from seeps in California and Texas.

Tonights project was hafting some stone blades in deer leg phallanges. The phallanges were drilled out to receive a stemmed point. Dried asphaltum (left) was heated over hot coals in soapstone bowl and applied to the bone and point. When it cools it forms a fairly solid haft. More so, it was used to waterproof the bindings hafting the blade to the shaft.
Posted by Mark at 5:44 PM

Interesting! Where do you get asphaltum at?

The asphaltum I've been working with I was given by an 'abo' out in California. He collected the dried chunks from some seeps he came across. The modern abo/McGuiver could use black top road tar, or roofing tar, ...same stuff basically.