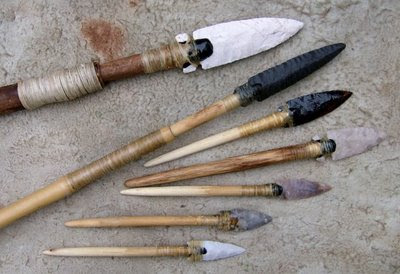 I was planning putting a couple of light spears together this weekend that I had made some stone points for. One consideration was whether to attach the spearhead to the shaft directly, or with a foreshaft. That got me thinking...(uh, oh,).

What an ingenious innovation the foreshaft. 8,000 to 10,000 years ago, when Paleo Indians were walking the North American continent, some were using spears and atlatl darts with tapering wooden 'foreshafts', to which stone points were hafted. Instead of carrying many spears during a hunt, their composite weapon was more versatile. As the opportunity presented itself they could strike with the thrusting spear, pull back leaving the point and foreshaft in the beast, and "reload" in effect. Making a kill, the foreshaft could be dislodged from the shaft and utilized as a butchering blade. Repairs, and replacements, were easier since you were only working with the smaller foreshaft and point. Decades ago, early man was sometimes portrayed as a dull-witted opportunist, but scientists have have shown they were far from it in their ability to "adapt, improvise, and overcome" in their sometimes hostile environment.
Posted by Mark at 4:42 PM

Say, ever knap any rifle flints...?

Great post Mark. I love the way you think. Our forefathers had the same brain we do. The more I learn about native peoples the more I want to learn. And the more I realize how little I know. Because I have worked in "survival" circles I now know that what we think is survival was their everyday life. OK I'm done.