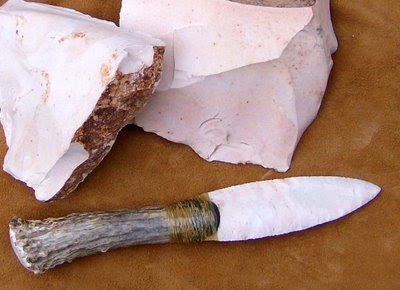 One of the most popular and widespread lithic resources in the central US is burlinton chert. Artifacts of the material have been found throughout the midwest. The colors can vary light in shade with white, cream, tan, and light pink predominating. Outcroppings occur primarily in Illinois, Missouri, and Iowa, but are found in other areas. One source said the chert was named after the city Burlington, Iowa..? According to John Stade, "some 320 million years ago much of Missouri, Iowa, and Illinois were covered by a large, warm, shallow sea which teemed with life. The primary life form was the crinoid, uncommon today though some are found in trenches of the deepest parts of the oceans. Crinoids were actually an animal but look like a plant. In the 320 million years since these creatures lived, died, and fell to the sea floor - the bottom became covered with many feet of sediment and compressed into limestone. Dissolved silica in the water helped to form large masses of chert" that we know today as burlington chert. This stone was prized by the Native peoples and utlilized for making their many stone tool forms - points, scrapers, drills, gravers, etc. ( Pictured is burlington chert samples and latest knife.)
Posted by Mark at 2:12 PM

Mark, what is easier to work with chert or flint? And, when and where are you going to show your wares next.

Chert and flint seem to be an interchangeable term. But, in my opinion, flint is glossier and finer in quality. Cherts are grainier. Though in every quarry you have varying grades of stone. Some consider all our stone in the US to be chert and European stone more flint. Knife River of ND I wouls call a flint. I decided to work the Fremont gun show this weekend, at Christensen Field, so I will have a table there. Not a demo set up like rendezvous.

Maybe I'll see you there.

Hello, I am from Omaha, and I am trying to get in to flintknapping. However, I can't find any raw materials. I've gotten quite a bit of black obsidian from sun valley stone, but it's all crap. I was just wondering if you had any tips for getting any kind of knappable materials short of ordering online. thanks.