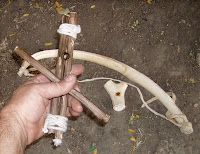 Got home today and immediately grabbed a mullein stalk and split it in three sections..."hello" kiss from the wife would have to wait. One part became my drill, the other two I tied together with some cord. In my area there is alot of mullein. I was curious how well this would work with the two-stick fireboard technic. Mullein has a styrofoam-like, soft pithy core, surrounded by a tough woody exterior. In the past, using a stalk as a handdrill I often drilled thru the fireboard before getting a coal...because of the hard woody sheath. I've learned though, you need to shave down the lower half-inch to thin the exterior wall for better results. My first 30-second attempt yeilded some smoke and brown powder in the groove. I re-shaved the lower end. The second attempt, with a little more determination, nearly drilled thru the two sticks of the fireboard. But, I had a smoldering coal for my efforts. It was small and needed some extra coaxing. Also, I recognize that a previously tried hole, with a little char to it, forms a coal easier than a fresh one. All in all, it answered my question of how well it would perform using this fireboard method. I sort of came to the conclusion, that for the time & ease of making the drill & hearth from a single stalk, I preferred this technic over splitting the stalk, forming the hole, and cutting the notch. And as for the "hello" kiss from the wife...I think I burned that bridge from the onset...lol.
Posted by Mark at 4:40 PM

Wifes often loose sight of what is important in the big picture don't they?

A coal is better than a kiss.(sometimes).