I had read that other primtive skill practitioners had used cattail stalk for handdrill fire making. Having worked with the handdrill for years, I recognized how limited my choices were for appropriate material to make it with in my area. Mullein grows wild along the roadsides. Yucca is more of an ornamental plant here, but grows in the sandhills in northcentral Nebraska. Cattail is an easily recognizable plant, that to my knowledge, grows in moist areas and is available everywhere I've seen. I went out a couple weeks ago and cut half a dozen stalks, and stripped them down, to dry. Over the past couple of days I've been attempting to make a hot coal with a cattail stalk on a yucca fireboard. So, far I have smoke, but no hot coal. Some observations: The stalks are fragile higher up, denser lower. If I squeeze too hard I compress the stalk, and buckle them. Some of the stalks have a styrofoam-like inner pith, like mullein. Others are fibrous. Maybe I need to study out where this changes in the stalk. In my enthusiasm to try this, I harvested these stalks before the seed head were mature. I will gather some later in the season. The powder that forms in the notch in brown. I am not getting enough heat, from friction, to form the black powder and combust it into a hot coal. Also, the stalks outer portion is sturdy enough to drill through the yucca fireboard, perhaps a harder fireboard like cottonwood. Well, primitive skills is just that...skills. Right now I am just embarking on the learning curve with this new material. But, what a great plant if I can make fire with it. Cattails are food, cordage, medicine, insulation, shelter, tinder, torches, etc.
Posted by Mark at 11:38 AM 9 comments: 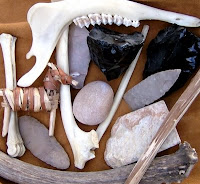 One man's trash, is another man's treasure...or something like that. I got the urge to start cleaning out the Paleolithic Shop of Horrors...my shed where I stash my projects & possibilities. It has gotten away from me in the past year or so that I could not even get in it. Well, I started sorting...and shoveling it out. A friend of mine said years ago, "You can't do something, if you don't have something to do it with." Boy, I must have taken that to heart. Making the first dent I've found buffalo ribs, deer jaws and leg bones for making knife handles, needles, awls, and bone flakers. I was saving spalls of soapstone to make more fat lamps and bowls for processing pitch and asphaltum. Stalks of yucca, mullein, and cottonwood are tucked away for friction fire sets. Chunks of rotted wood and chaga fungus make great coal extenders. Some of the dried rivercane shafts are made into atlatl darts. Half made points, flakes, scrapers, and cores of obsidian, nehawka, keokuk, novaculite, and English flint liter the wooden floor. Deer hides, buckets of dried clay, elk rawhide, sinew, pine pitch are heaped in piles and buried in boxes and buckets. I've got the stuff, now all I need...is time.
Posted by Mark at 6:35 PM 3 comments: 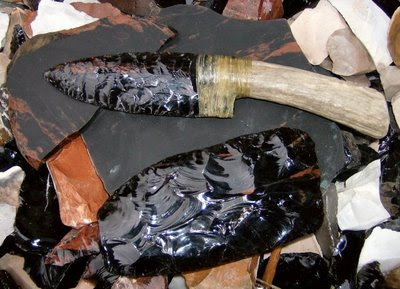 Earlier this month I attended the Nebraska Mineral & Gem Show and met a vendor who was eager to unload some mahogany obsidian slabs. This is the first knife, from those slabs, next to a cleaned slab. They are laying on a couple sawn slabs. Knappers will use sawn slabs to conserve good stone. The knife is 10-inches long, in a elk antler handle, wrapped with sinew.
This blade has already tasted blood...cut my finger handling it...>ouch<.
Posted by Mark at 6:20 PM 5 comments: 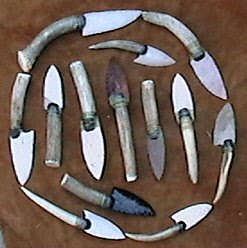 Completed another series of knives. About once a month I get a spurt of ambition and haft some antler and stone.
Posted by Mark at 7:37 AM No comments: 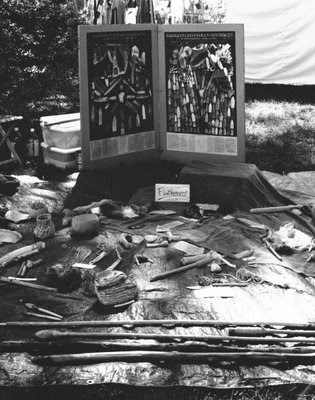 I was cleaning out my book shelf and came across an old picture of my first 'primitive skills' set up at a local event in 199?. Finally decided to step out do something publicly. No one had done something quite like it, in the area, so it was well received. I cringe now looking at it, and so did the buckskinners I was next to,...with my big green plastic tarp, posters taped to cardboard panels, laying out a ga-zillion pieces. The take down after the event was gruelling...hot & tired after several days you had to pick it up and pack it away. I finally evolved into a more efficient display set up. Though, I do not know if I really saved any time & effort, because now I am hauling around a large canvas fly tent. Now I roll up a large tub with wheels (wheels are good) and set out 6-8 'trays' of display and instructional material: area stone & points, stone & bone tools, flintknapping tools & process examples, primitive hafting, deer leg 'tool kit', friction fire making, etc. Of course, this is only the instructional part. Have a buffalo 'trade blanket' of stone knives, spears, tomahawks, etc., and the tent 'decorative accessories.' But, when the day is done I can retreive the tub (with the wheels), and pick up the display in minutes...wheeee. That way I have more time to drop poles, pull stakes, fold the tent,
...>sheesh<. 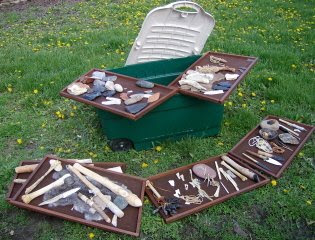 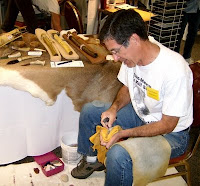 Woke up this morning, with a start, vaguely remembering today was the Nebraska Mineral & Gem Club's annual show in Omaha, NE. Told my kids I was going to a rock show, and realized by their expressions, 'rock show' meant different things to us...lol. Hurried and got on the road, realizing I forgot to shave, and drove the 31 miles. My purpose was two-fold. One - you can sometimes score some knappable material, which I did, picking up a boulders worth of mahogany obsidian slabs and chuncks at a great price.

My second objective was to meet up with retired physics teacher, Dennis Beckman. I met him briefly years ago, at another rock show, when he was starting knapping. He has progressed nicely and had a table of some of his handiwork-points, flutes, beading, bow & arrows. He says on his website..."So, how did this all get started for me? A few years back, I began knapping. Made some of the ugliest little points, but I thought they were nice and it was a lot of fun. As time passed the quality got better and I decided the points should be put on the end of a stick. So I started making arrows and atlatls. And, if you have arrows, you must have a bow, etc …" Check out his Native Crafts website at: http://members.cox.net/mynativecrafts/
Posted by Mark at 1:40 PM No comments: 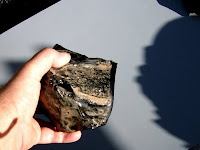 Flintknapping is a process of reduction. You have a large nodule. You fracture off a spall or flake. The thick parts of that flake are thinned out with percussion, then pressure flaked into a point.
I am going to try to explain a few basic concepts behind striking 'predictable' flakes off of a core with a hammerstone. Your intial core needs a flat striking surface...this is called the 'platform.' Some oval nodules would need to be broken in half, or one end knocked off, if necessary to produce a flat platform. 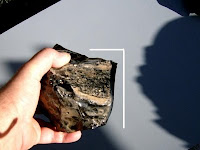 The angle between the striking platform and the adjacent face should be 90-degrees, or less, to successfully strike flakes off. An obtuse angle of more than 90-degrees will not work. The obsidian core pictured has a platform, and adjacent side, at slightly less than 90-degrees as an example.
The next concept is important. 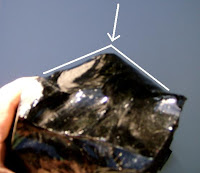 If you have ever seen a BB hit a glass pane...it produces a cone of about 100-degrees. This is called the 'Hertzian cone.' It is consistant. The picture shows an obsidian core which has been struck, with insufficient force to crack the core, that left evidence of the force generated into the rock- forming the hertzian cone. Cool, huh? Early man was intelligent and took note of cause and effect to be able to develop stone working skills to high levels. 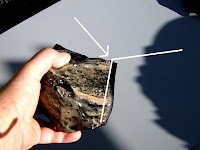 Now, in order to strike thin predictable flakes off the core, and not just make gravel, I mentally apply this concept of the hertzian cone. I judge what angle I need to strike a glancing blow, that one edge of the cone of force will intersect into the edge of the rock face. I prepare my platform, grind it some with the hammerstone, to make it more abrasive, so that it make grip a little when I make contact.


There is one more principle I can apply - energy follows ridges. You can see some of the ridges formed by the removed flakes on the next pic. My flakes will be longer if there is a ridge to follow. If there is no ridge, the flake may end up somewhat clam shell shaped. Depends on what you want. Aborigninal man at times took great care in the preparation of the core to remove specialized flakes, as in the European Levallois and Mousterian technics. 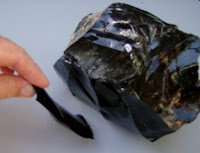 Here is a top shot of the removed flake. You can see ridges left behind, which set up for more long flake removal.

Here are several flakes, about 3 inches long, 2 inches wide. The one on the right struck a pebble and lost a section when it detached. This is how butchering flakes were made - basically one blow stone tools. The edges are very sharp. The middle and right flakes have a curled base edge. This could be retouched a little, and sides dulled, to make hide scrapers. The one on the right could have the top retouched to make a perforator/awl for making holes in a hide to run lacing.
By judiciously striking somewhat thin flakes off of the core - I have less work to thin the flake for a point, and I can remove more usable flakes and blades per pound of material (stone age economics).
Posted by Mark at 10:54 AM No comments:

Stick and Stones and Bones

Finished off a few knives today. Have some more work on the ceremonial tomahawk. Needs embellishments like a scalp lock of hair, some fringes and seed beads. I am not sure what it is, but I find utter fascination sitting at a rock pile striking off flakes...sharp cutting edges, squared scraping edges for wood, chisel-like edges for graving bone. John & Geri McPherson created the "Naked into the Wilderness" series - great info. If I wrote something, it would have to be "Into the Wilderness with the Clothes on Your Back". I've seen myself naked in the mirror...it's not pretty...lol. Knapping can be dangerous enough, even taking safety precautions, without exposing other vulnerable assets. Ok, that's enough...I'm tired and HUNGRY...probably got some low blood sugar thang going.
Posted by Mark at 5:15 PM No comments: