It's interesting that you find the same devices used by different cultures, around the world, often separated by great time and distance. The use of the atlatl to hurl a dart, seen on cave paintings of Paleolithic Europe 15,000 years ago, was also employed by the aborigines of Austrailia, and by native peoples of North and South America. Examples of fire-making technics, like the handdrill and bow & drill, are similarly found. In the movie, "Crocodile Dundee 2", Paul Hogan uses a bullroarer to contact his aborigine friends. A bone churinga, or bullroarer, was found dating back 10,000 years ago in Europe (see small picture). References can also be found in ancient Greece, the Maori tribe of New Zealand, arctic inhabitants, and native peoples of the Americas. Many tribes of Native Americans used the bullroarer as a sacred instrument to invoke the spirits during rites of passage to manhood, healing, for good fortune in hunts and growing of crops. The Apache, Blackfeet, Hopi, Athabaskan, Yokuts, Pomo, and Aztecs to name a few. The Navajo called it the "groaning stick" (tsin di' ni) and used it to drive away evil spirits and illness.

Generally, it is a flat piece of bone, metal, or more commonly dense wood, about 2-inches wide by 6 to 10-inches long, with a cord attached to it. The 'paddle' is set spinning, and then swung overhead in a circle to produce a vibrant "whirring" sound. A variation among the Native Americans was to attach the cord to a 2-foot long stick, which was used to twirl the churinga. It is interesting, at historical events, when I use the bullroarer the reaction of people...it is like it evokes a primal recognition in them. 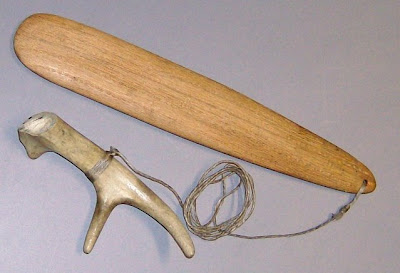 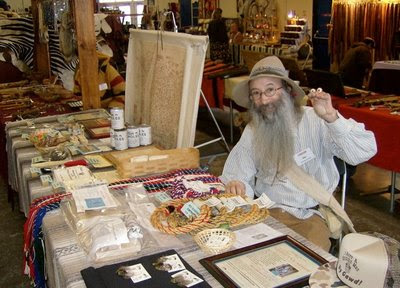 Attended the Modern & Black Powder Gun Show, in Lincoln, NE, held over last weekend. Met alot of nice people, learned some things, all in all a good time. One of the unique characters there is Les Vilda, aka 'Rabbi.' I have seen him at numerous rendezvous and he is always the center of attention as he is an avid entertainer, historian, and educator. Borrowing from his website..."Les's knowledge of history comes not only from books, but also from personal experience as a Living Historian. He has canoed the full length (2500 miles) of the Missouri River and 500 miles of the Mississippi River. He walked 980 miles of the Santa Fe Trail with a pack donkey in 1984 and 1100 miles of the trail with a horse and wagon in 1987. In 1988, Les traveled nearly 300 miles of the Oregon Trail in Wyoming on horseback and, in 1992, traveled 170 miles of the Nebraska City Cut-Off of the Oregon Trail in Nebraska with a wagon and a donkey-mule team." He conducts educational programs for schools, museums, and historical events on Lewis & Clark, the western trails, and skills. Check out his website at: http://www.havedonkeywilltravel.com/
Posted by Mark at 11:49 AM 4 comments: 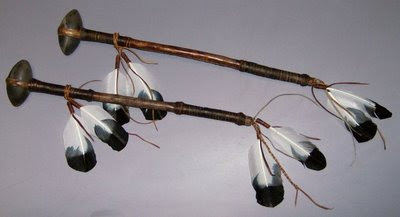 Thought I'd post a pic of the finished war clubs. There is a modern & black powder gun show in Lincoln, NE next weekend I am prep-ing for. This is fun event. The blackpowder portion of the event is dressed in buckskins and sell period trade goods. A lot of characters who like to have a good time. I always get a table selling my stone knives, rattles, spears, war clubs & tomahawks...supports the 'hobby' and you always meet some interesting people. 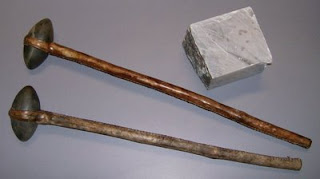 I had the opportunity to haft a couple of modern made stone club & axe heads last month (see previous posts). One of them was a double pointed stone war club head. This got me thinking how I could make one. After doing some research, I found that alabaster was a stone that was sometimes utilized. This stone is used for sculpture because of its ability to be chiseled, sanded, and polished. Historically, where this was available-shaped war club heads, atlatl banner stones, pendants, etc. were made out of alabaster. Traditionally, they are made using the peck and grind process. Pecking the 'blank' with a hammerstone to form its general shape, then grinding it with fine sand on a stone slab. A groove is pecked around the head to facilitate hafting. The head is polished with animal fat and hide. Warriors would then decorate their weapons as the 'spirit' dictated with beads, fur, fringes, scalplocks, etc. Basically, there were three main types of Plains stone war clubs. One was a simple ovoid rock with a pecked hafting groove. The second, what I tried, was forming a double pointed stone head. The third, was similar to the medevil mace...a stone was wrapped in a loose fitting of rawhide and attached to a handle. The handles were sometimes up to several feet long allowing them to be used effectively from horseback.
Alabaster is an interesting stone to work with. I'll have to try my hand at making some atlatl bannerstones. One experience that is always reenforced working primitively is-the wear and tear your body takes flintknapping, grinding stone, scraping hides, etc. You really appreciate the modern tools in comparison.
Posted by Mark at 6:58 PM 4 comments: