What we know about past peoples and events archaeologists speculate from what evidence survived in context with the world in which it was found. They sumise that the Americas were the last of the major continents to be inhabited, starting somewhere around 10000 - 11500 BC. These time frames are changing as new evidence is found. The Paleolithic, or Stone Age, was divided into two eras in North America...the Early and Late Paleo. The Early was marked by the advent of the big game hunters of the Ice Age, using their distinctive Clovis style points to hunt mammoth and mastodon, giant ground sloths, and giant bison. Around 9000 BC the climate began to change in Nebraska as the glaciers receded, becoming much as it is today. The large boreal forests were replaced by grasslands. The large game disappeared and animals similar to today remained. New stone spear point styles emerged with this change. The points were long, narrow, unfluted compared to Clovis styles, and more lance-like...lanceolate. There were a number of varieties which archaelogists recognized as different distinct cultural groups - Agate Basin, Hell Gap, Scottsbluff, Eden, Alberta, Cody, and Frederick. They were still nomadic hunters living off the game and wild fruits and vegetables gathered, and they still had no permanent settlements or farming which marked the next phase of development. The lanceolate points pictured were found in Nebraska and classified, from top to bottom, Eden, Agate Basin, Plainview, and Scottsbluff. 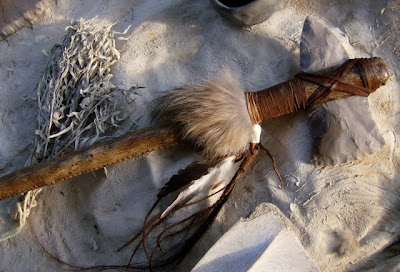 The tomahawk is a much romaticized weapon of the Native Americans. Certainly it would have been utilized as a fighting weapon, but much more common and of much more use was as a chopping tool for day to day camp use. The earliest blades were made of stone, sometimes very crudely but with a serviceable edge, and was later replaced by metal axe heads traders bartered with for furs. I knapped several blades out in January and have been waiting for the inspiration to haft them.
Posted by Mark at 3:25 PM 6 comments: