A paper was pulished in Scientific Reports, February 2018, on the archaeological site of Porto Maior, above the Mino River basin in northwest Spain. 3,698 stone artifacts were found, in situ, dating from around 200,000 to 300,000 years old. Distinctive were the large cutting tools - handaxes, cleavers, trihedral picks and choppers, almost exclusively of quartzite. Lab analysis showed they were used on site, on wood and bone, probably to break up carcasses, and abandoned. The unique aspect of the assemblage is that it is the first European site discovered, of large cutting tools, that were more relevant in size and weight to assemblages found in Africa and the Near East, than the smaller Acheulean tools of Europe.  Archaeologists speculate that there were multiple human lineages living in southwest Europe, with alternative stone tool technologies, around the same period. You can find the story and a link to the Scientific Reports article at:
https://phys.org/news/2018-02-giant-handaxes-groups-early-humans.html 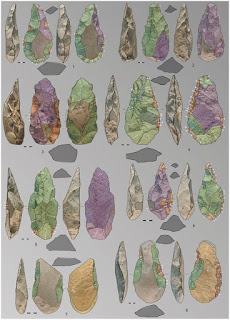 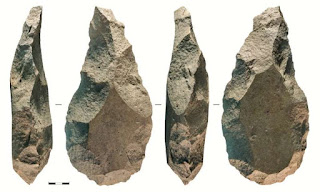 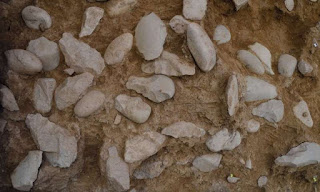 Some of the earliest speculated evidence of clothing being made comes from the Blombos Cave bone awls, dated at 77,000 years old.  In 1991, on the southern tip of Africa, archaeologists discovered bones awls, among other stone artifacts.  The bone awls were generally around 5-inches long and made from small antelope limb bones. The bones may have been broken in the process of extracting marrow, or deliberately broken to make a tool.  They show signs of a stone flake being used to sharpen the bone shards to a point.  The manufacture of these awls illustrate advanced thinking.  Interestingly, studies of the polished areas of the awls, show they were used held between the thumb and forefinger, of the right hand, 3/4 inches from the tip.  Bones awls were used to shred plants for fibers, punch holes in wood or hide, or punch lacing holes for making clothing. 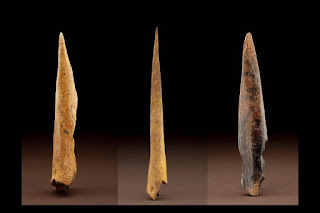 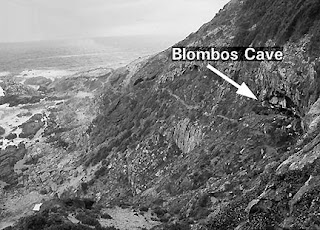 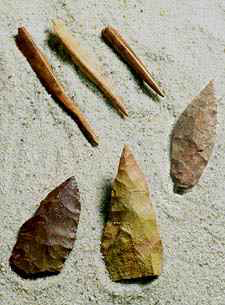 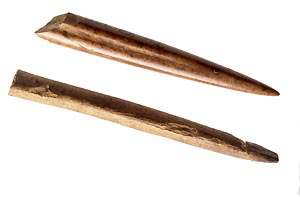 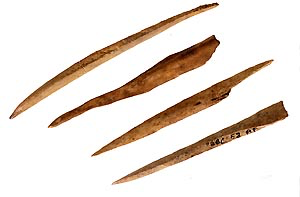 At some point you need something to CHOP with, to fell shelter poles, butcher a mammoth, reduce excess material in the process of making a bow or hollowing a canoe.  Hand held tools include the expedient chunk of rock with a angular edge, to removing a few flakes from a quartzite cobble to make a chopper, to the intricate knapping of a multi-purpose hand axe.  Chopping can also be facilitated by using antler or stone wedges with a baton.  Putting a handle on a sharp edge gives you greater mechanical efficiency.  Pictured are various flaked, pecked and ground stone, and antler adze and axes.  (Middle picture, antler axe - Tarjus Gaaren) 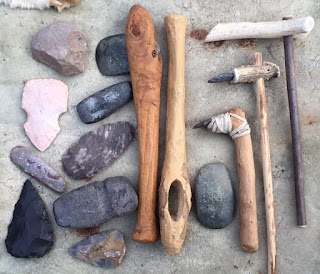 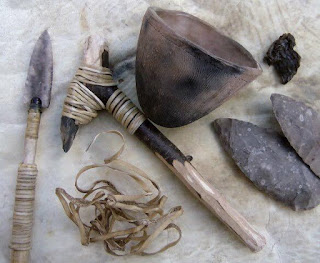 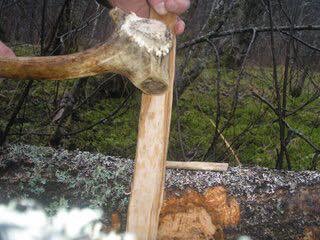 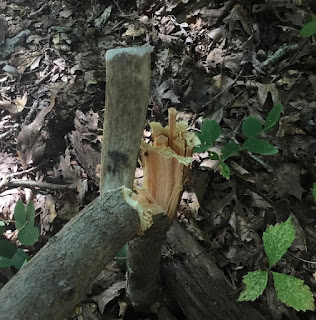 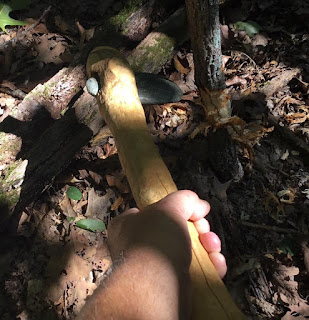 This is my DEER LEG TOOL KIT I use to show possible resources and tools from a white tail deer lower leg, something a hunter today would discard, but earlier peoples would harvest.  Left to right:  the white tail deer leg.  The thin hide is skinned from the leg and scraped, and a possible knife sheath is made from the rawhide (not pictured). The harvested leg bone is shaped into a hide scraper, or shards are abraded into awls or needles, the inner marrow eaten.  The dried leg tendon is gently beaten with a wooden baton, or rock, to break and separate the sinew from the tendon sheath.  Sinew is used as sewing thread or used to wrap stone points to shafts.  The four phalange bones (lower right) can be used as beads, or scored with a stone burin and split.  These halves are hollowed with a stone drill and scraped with flakes in the process of making fish hooks.  Pointed bones inside the hooves are ground down into arrowheads.  Any hide scraps or hooves are slowly boiled, in a clay pot, leaching out the collagen.  This brownish liquid is reduced down - making hide glue.  The remaining item is a deer toe rattle made out of the deer leg bone, deer hide, hooves, some fur, and hide glue.  These tools demonstrate the resourcefulness of early man and just some of the possible uses of just the lower leg of an animal. 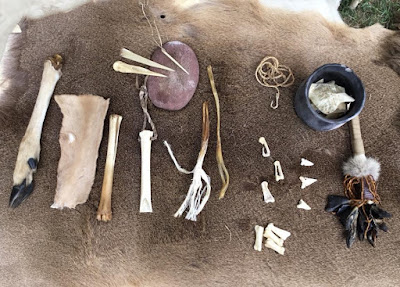 The SHORT-FACED BEAR is an extinct giant species that inhabited Nebraska until around 11,000 years ago. It was the most common early North American bear, and most abundant in California.  Around Lubbock Lake, in Texas, is the only evidence ever found, of humans butchering a short-faced bear. There are two recognized species: Arctodus pristinus and Arctodus simus, with the latter considered to be one of the largest known terrestrial mammalian carnivores that has ever existed.  The average short-faced bear stood 8–10 feet tall on its hind legs, while a large specimen would have been 11–12 feet tall, with a 14-foot vertical arm reach. When walking on all fours, it stood 6 feet high at the shoulder, tall enough to look a man in the eye.  It is estimated to have weighed in excess of 2,000 lb.s.  At Riverbluff Cave, in Greene County, Missouri, a series of claw marks 15 feet high have been found along the cave wall.  A. simus was suggested to have been highly carnivorous and as an adult would have required about 35 lb.s of flesh per day to survive. 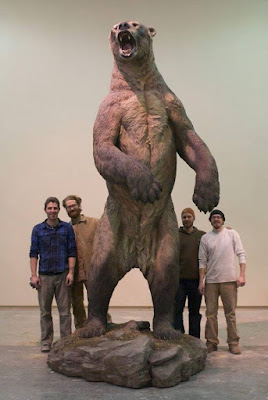 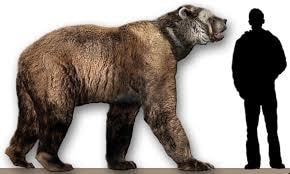 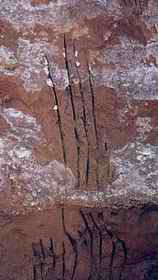 Stone was used by early man to make durable, sharp tools to cut, scrape, chop, pierce, pound, and bore.  These tools demonstrated his cognitive ability to plan, reason, and communicate skills.  There is evidence that on the southern tip of Africa, at Pinnacle Point, early man used fire to alter stone - a technic known as HEAT TREATING.  This treatment altered the poor quality properties of silcrete - making it glossier, easier to shape and flake, sharper.  Silcrete is a conglomerate formed when surface sand and gravel are cemented by dissolved silica, resembling quartzite.  The picture below shows an unheated piece of silcrete, next to a heat treated flaked tool.  The artifacts collected date back 72,000 years and shows fire being commanded in a sophisticated manner.  Before this discovery, heat treating was thought to have originated in Europe around 25,000 years ago.  Researchers replicated the heat treating process by burying spalls of silcrete beneath a fire pit.  The resulting process changed the properties of the mineral turning it reddish in color, glossier, and easier to flake.  Heat treating is used today by modern flintknappers to alter difficult stone, using kilns and ovens to control the level of heat and duration. 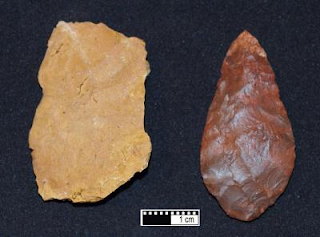 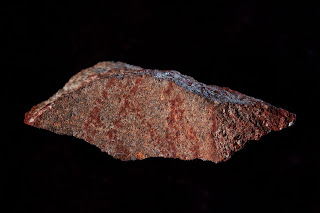 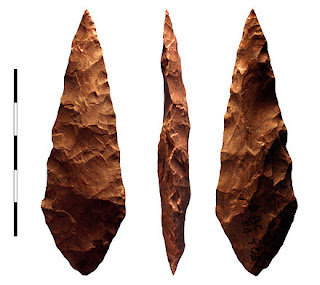 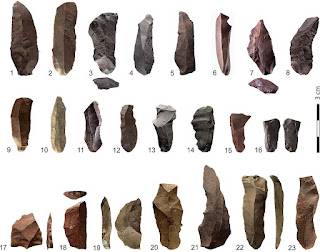 I thought this insight was of value.  A number of years ago, Bob Berg, of Thunderbird Atlatl, and Atlatl Bob/William Perkins, agreed on a point (which they rarely do) - foreshafts in atlatl darts are ineffective for big game hunting.  There are scores of atlatl foreshafts that have been discovered, along with a few dart shafts without foreshafts, from prehistoric times.  I know I have seen numerous books with line drawings always depicting darts with foreshafts.  Mr. Berg and Mr. Perkins contend - that thru numerous experiments, hunting experiences, and others hunting experiences, that these fore shafts have limitations. A dart, with a foreshaft, will penetrate as deep as the foreshaft.  If the foreshaft is 5-inches, it will penetrate 5-inches, sometimes with the foreshaft breaking at the connection.  Darts without, will penetrate deeper and be more effective in taking big game.  Their conjecture is that darts with foreshafts were more for warfare than hunting. 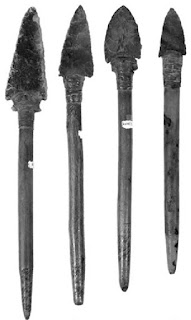 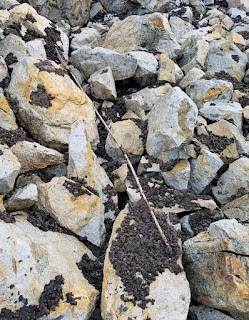