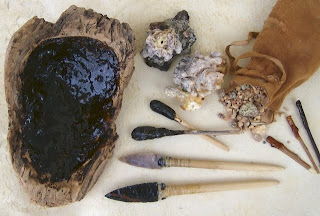 Before the last  storm dropped 17 inches of snow, I was out exploring a stand of pine trees with the dogs, and came across some pitch sources.  When a pine tree is injuried it will exude a sticky resin to protect the exposed area.  Pine pitch has been used for millenia as an adhesive/filler to haft points and as a waterproofing agent - as with bark canoes.  Tightly woven baskets were coated on the insides to make water containers by the desert peoples of the American southwest.  Slowly melting the pitch in a container over the hot coals, I'll usually add up to 50% powdered charcoal, from the charred limbs from the fire to strengthen the pitch.  If a  little more elasticity is needed, I will use some ground up dung from a plant eater, such as deer or rabbit, for the additive as traditional peoples have done.  Pitch sticks, for hafting points, are made by simply dipping a stick repeatedly into the hot mixture, and then into a container of water to build up a bulbous glob on a stick.  When you are ready to haft a point you simply heat the glob over the coals, melting it somewhat, and place a small amount in the prepared notch.  The point is the pressed in and seated as the pitch cools within minutes.  Wetted sinew then further ties the point more firmly into place as it dries and shrinks.  Not wanting to waste any last pitch residue, I will usually wipe the ends of some small tinder sticks with the flamable pitch to save for  future firestarting efforts.  Pictured above is dried pitch, dart foreshafts that have been hafted using pitch and sinew,  prepared pitch and tinder sticks.  On the left is a burl of a cottonwood tree that was pitch coated to make an expedient water cup, from an excursion. 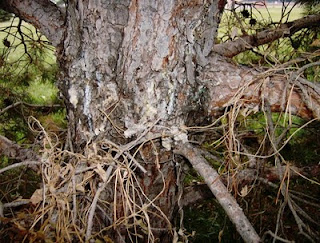 Merry Christmas to All 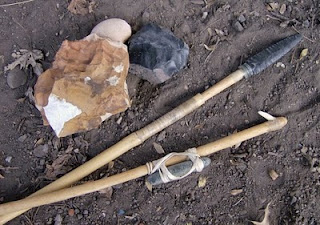 I would like to take this opportunity to wish all a Merry Christmas.  Thank you for taking an interest in this blog, and for sharing your sites, stories, knowledge, and friendship as we all learn from one another. -Mark
Posted by Mark at 11:27 AM 3 comments: 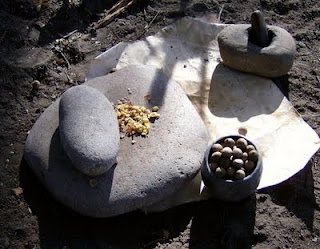 Archaeologists roughly date the Archaic Period, in North America,  around 5000 to 1000 BC.  Big game hunters and game of the Clovis, Folsom, and Plano had disappeared - mammoth, ancient bison, and giant ground sloths.  New techniques and tools for hunting smaller game, such as deer, antelope, fish, and fowl appeared.  The people began to develop traits of the foraging tradition - they were no longer just hunters, but not yet farmers.  The presense of mortars and grinding stones meant that plant seeds and nuts were being utilized, probably as well as roots and berries.  Pictured is grinding acorn meats.  A few white oaks have acorns sweet enough to be eaten raw, but most are extremely bitter due to a chemical called tannin.  Tannin is water soluable and can be removed by boiling the meats in several changes of water - until the brownish coloring no longer appears.  Native Americans would also put the crushed meats in porous bags in moving streams, to leech out the tannin.  The Pawnee called acorns from the bur oak, Patki - natawawi, meaning "acorn bearing."  Often the acorns would be used in combination with corn meal to make it more palatable.  They did not use seasonings, so to make the traditional gruel or mush, acorn meal was simply mixed with water.
Posted by Mark at 12:51 PM 1 comment: 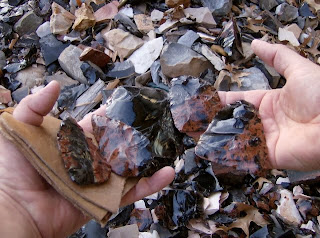 Today the temperature was in the 50's, but it felt much warmer working in the sun.  Taking a block of mahogany obsidian, and a large hammer stone, I struck a number of flakes off.  Using an antler billet I thinned the flakes, basically making a handful of preforms.  I'll start pressure flaking them into knife blades, then haft them into antler handles.  Obsidian is formed when lava cools real fast, producing a volcanic glass in effect.  The fresh edges are extremely sharp, evidenced by the fact that I was surprised to find blood on my hands though I had not felt the cut. I am alway very careful when working with obsidian because one careless move could result in a serious laceration.  Until the final pass of pressure flaking, the edges are always ground down -  for safety and to produce a solid edge.  Trying to push a flake off of an unground sharp edge, it will simply crush and crumble.  An edge which has been properly arbraded will alllow you to build sufficient pressure against it and remove a longer flake.  I'll post updates of the progression from preform to knives as I go along.
Posted by Mark at 6:39 PM 2 comments: