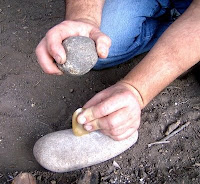 Flintknapping, chipping fine points and blades, is a art form that takes the right tools, time to master, and the proper stone. The possibility of coming across flint-type stone while walking the woods is not likely to happen...well, here in Nebraska. Expedient stone tools can be made with common quartzite pebbles or some fine grained stones. For these pictures, I picked up a "skipping stone" from a local stream...kind of a flat ovoid rock. Squeezing the pebble between my fingers, I set it firmly on a rock "anvil". I could also hold it in place with an improvised tongs made by bending a green stick in half, to protect my fingers. Taking another rock, I soundly strike the top of the pebble, breaking it in two. This method of controlled breaking is referred to as bi-polar percussion. One archaeologist/primitive technician pointed out that this is the way children instinctively make stone tools when not shown otherwise. This technic works a good deal of the time creating two stone halves with somewhat sharp edges that can be used, in a pinch... to skin a rabbit, saw a fireboard notch, or scrape a hide. 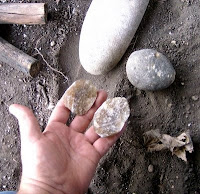 Two halves of a common quartzite pebble with sharp-lipped edges 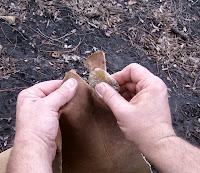 Cutting leather with one of the halves
Posted by Mark at 5:19 PM 4 comments:

Deer and elk are classified as ungulates, or hoofed animals. Their feet are actually two elongated toes. In the leg are two sets of phallanges that come off the lower leg bone and attach to small bones inside the hooves. These phallange bones have been used for beads, ceremonial rattles, small handles for stone blades, and fishhooks. The upper picture shows kind of a breakdown of the bones in a lower leg of a deer. The lower photo shows some of the reduction process for making a fishhook from the phallange. Som 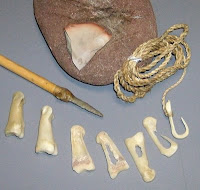 etimes I will soak the bone a day or so to soften the outer layer. Using a stone flake you score around the bone length-wise and carefully split it in half. It is basically hollow with marrow inside. Using a stone drill, I will then start to open up the middle portion of the phallange by boring holes in it. The tedious part is carefully grinding the excess away on an abrasive rock and shaving smooth the bone into shape with a stone flake. In this way I have the potential to make two hooks from one bone. I have heard that another way to appoach this is to simply grind both sides down on a sanding stone till you expose the hollow center, then form it into a hook. Truthfully, I have never been successful fishing with these bone hooks yet, but several of my friends, who are into primitive skills, have caught fish and bullfrogs...with great patience and perseverence using bone hooks.
Posted by Mark at 5:44 PM 3 comments: 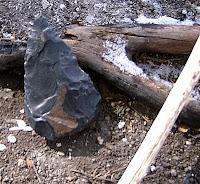 The handaxe, a hand-sized tear drop-shaped stone tool, had been utilized for tens of thousands of years. First making its appearance in Africa, it was the first deliberately stylized form of stone tool working. Some considered it be the "swiss army knife" of the stone age because of its diverse uses. You carried everything you owned, so you only carried what was important. A multi-functional tool, like the handaxe, could be used for a variety of tasks. The tip was good for digging and piercing, for getting to buried bulbs and tubers or making the incision on a fresh kill. The upper edges near the tip were thinned, like a knife, for cutting and butchering purposes. The deep flake scars in the middle range work well for scraping shafts...also for producing shavings for tinder in wet weather. Edges closer to the base were suitable for chopping and hacking functions. The thick butt made a good hand hold as well serving as a good tool for pounding and smashing. If needed, the handaxe was also a core that sharp flakes could be removed from. Basically, you had a knife, hammer, axe, scraper, pick, blade core, and more - all in one. 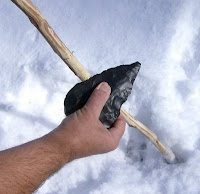 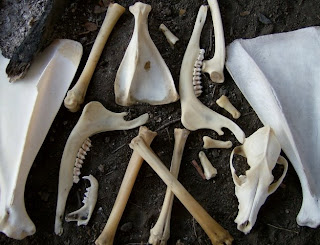 I had a personal revelation, or spark of understanding today. Archaeologists had noted that large tracts of Nebraska really did not have any decent stone resources for making necessary tools. A lot of the stone was carried in from remote locations. As I considered this, something hit me. The plains, before the white man, was a sea of buffalo. Buffalo, deer, elk, beaver, etc., provided food, clothing, shelter, and another natural resource...bone. Bone was considered the "plastic" of the stone age in its ability to be shaped, by reduction, into a multitude of items - knives, awls, needles, fishhooks, fleshers, spearheads, etc. The oldest known bone tool found in North America was a carabou bone flesher dated at 27,000 BP. Being a flintknapper, you tend to think in terms of stone use...kind of like the adage.."when you're a hammer, everythings a nail." Nature provided even in the absence of prime stone resources. The lower picture shows some of the possible uses from my tool kit. Top: buffalo jaw war club, the 'hinge' section was removed to form a point. From the left: elk scapula knife, similar to archaeology finds in Nebraska; a rib and leg bone knife; two wedges, for splitting wood; four awls from leg bone and ulna; two bone arrowheads; fishhook; misc. needles; leg bone pressure flaker for flintknapping, based on archaeology find. 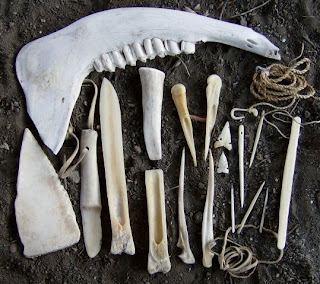