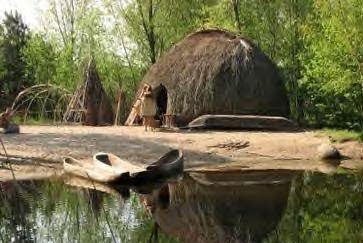 Around 8500 BC - 4000 BC, in Europe, Mesolithic (middle stone age) man was transitioning from a nomadic hunter gatherer to farming and domestication of animals. They excelled at fishing, learning to build fish weirs for efficiency. Axes were used to fell trees to construct living quarters and fishing vessels, as the above picture depicts from the Archeon, the living history/experimental archaeology park in the Netherlands. Reading a couple of articles concerning artifacts of recovered Danish axes, I became intrigued in their design and use. The two variations below are an antler axe, and a stone blade set in antler. A hole was bored that a slender handle could be run thru and wedged into for hafting. I was a little sceptical how the antler axe would fare chopping wood, but it did as well as the stone axe, on green wood. When it dulled, I just worked the end on across a sandstone abrader. Examples of antler axes have survived because of the properties of the bogs to preserve them. I liked the design of the stone hafted in antler. It is a little light weight but did the job felling shelter poles. It is amazing the ingenuity and variation man developed utilizing natures resources to live and survive. 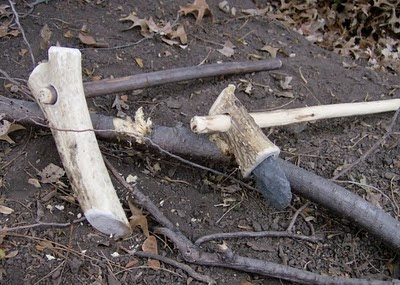