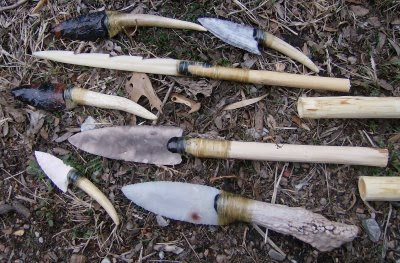 Making knives and spears in prep for the Ren Faire, for part of the demo's and to sell. I still have some work to do on the spear foreshafts - tapering them to fit into the spear shafts snugly. Also, soaking and wrapping rawhide around the top of the spearshafts, so that they won't split out when the foreshafts are pushed in. I used to drive myself crazy, working on these projects for hours on the weekends. Maybe I've matured or disciplined a bit, now I only spend about 15 -20 minutes a day, to complete my projects...slowly, but surely.

I came across a cool site that is worth checking out. Flintknapper, Bernard Ginelli, has a really nicely done website of his work in European stone tools. The only drawback, is that it is in French, ...and I don't read French. Check it out at: http://bernardginelli.free.fr/index.php

Also, John Lord's site from England, is interesting: http://www.flintknapping.co.uk/ ...and it's in English, for us non-bilinguals...lol.
Posted by Mark at 6:49 PM 1 comment: 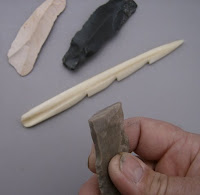 I was contacted by a Renaissance Faire promoter to demonstrate at an upcoming event. In the past I have done a few, representing European stone age. A little bit of a stretch for a ren faire, but they appreciate the educational aspect..."edu-tainment" they call it. Besides, bone needles invented 27,000 years ago, were still used by the common man into medevil times. Flintknapping skills once used to make spearpoints translated into the budding gun flint industry. A lot of the tools & technics utilized in the European stone age were similarly found in various cultures around the world - hand drill fire-making, darts & atlatls, flintknapping stone tools. One interesting innovation of the "Aurignacian" stone age culture of Europe (28,000 to 21,000 B.C.) was a tool we call the burin. The name "Aurignacian" refers to particular way people were living, determined by the artifacts they left. They had refined striking blades off of a specially prepared flint core, to modify into different tool forms...end scrapers, backed knives, and burins. A burin was flint blade broken at an oblique angle, and beveled into a chisel-like tool used to carve antler, wood, and bone. This invention helped to create a whole new series of bone and antler tools and weapons. Some of the earliest ivory carvings of animal and human forms began to appear at this time. The burin was used to score deep parallel grooves in lengths of antler and bone to isolate slivers that were pried out and worked into needles and spear heads. 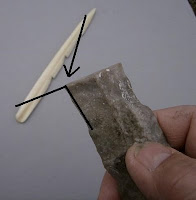 This burin was made by snapping a blade at an angle. Then a quick stroke of a small hammerstone or billet takes off the outside edge to leave a sharp chisel edge. In the background in a barbed bone spear point I've been working on.
Posted by Mark at 7:28 PM 3 comments:

I acquired this point from an artifact hunter at a gem and mineral show. He related it was a personal find he picked up in Oklahoma. It looks like it was knapped out of Burlington chert and possibly would have been a small knife form. It measures 2 1/4 inches long, and just over 1 inch wide. Even though it was missing part of the base, I found it interesting because it appeared to be beveled in the Archaic style. I am no expert on artifacts, but appreciated the knapping technic it demonstrated. The Archaic period (8000 - 1000 BC) in North America was characterized by some points, that were beveled, or unifacially resharpened. Basically, what this means, was that a series of flakes were removed from the face of one side - to produce a steep, wedge-shaped cutting edge. The point was then turned over and it was repeated on the other side. As you do this the point takes on a parallelogram, or propeller-like shape, in the cross section. In this manner it takes less effort to make a cutting edge and you can get more resharpenings before the piece is exhausted. Some beveled points have been resharpened so many times, that they have come to resemble drills, archaeologists have speculated. What do I learn from all of this? Beveling is the easiest method to produce a strong sharp edge on a dulled stone blade...perhaps to retouch after sawing fireboard notches. It may not be the prettiest, but it is a functional technic.