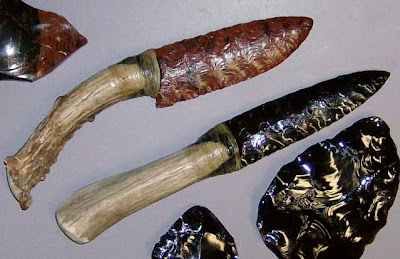 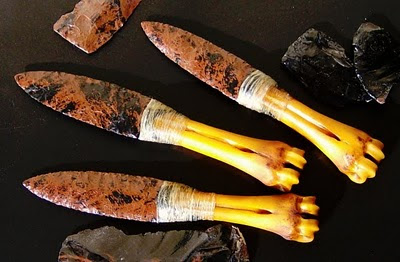 When early man crossed the landscape, all he had to work with was what nature provided...wood, stone, bone, shell, etc. He skillfully crafted tools for cutting, chopping, scraping, and drilling from outcroppings of rock. Quality stone was a valuable commodity as it provided the material to make tools for daily survival. This past weekend I was able to finish a series of stone knives, three mahogany obsidian and deer leg bone knives pictured above, in preparation for upcoming historical events. I sell these to support my stone addiction. Living in Nebraska there is not alot of good stone to work with so you end up trading pieces of paper with pictures of presidents on them for nice flints, cherts, and obsidians. There are always better flintknappers and artisans than I but really enjoy demonstrating the living skills of our ancestors....making stone and bone tools, starting fires by"rubbing two sticks together", or launching stone tipped darts with an atlatl. Everyone needs something that gets them excited...wakes them up early, and keeps them up late at night. 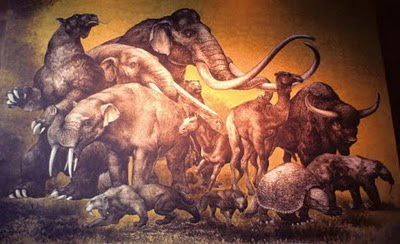 It is debated that around 12,000 years ago the first peoples set foot in the Midwest, coming up from the south, as the land to the north was still covered by the Wisconsin glacier of the Ice Age. As the climate warmed and the ice receded plant and animal life re-established. Animal life was quite different than today with varities of megafauna, distinctly large animals of this period - mammoth, mastodon, giant bison, ground sloths, and beaver. Also found was the camel, horse, peccary, and tapir. Dangerous predetors such as the dire wolf, saber toothed tiger, American lion, and short-faced bear roamed the landscape. Above is a section of a beautiful mural from the National Museum of Anthropology in Mexico City. These Paleohunters (paleo is a Greek word for "ancient") were unique and identified by the type of stone points used on their spears - the Clovis point, so named for the location where the first was discovered in Clovis, New Mexico. Clovis points were unique being long and slender with a concave base. Flutes were driven up, from the base on both sides, supposedly to allow the attachment of a narrow shaft. Also the pointed ears projecting from the base helped keep the point set in place in the flesh. Pictured below is a Clovis point of Smokey Hills chert found in Nebraska. Around 9000 years ago the

point style began to change as the megafauna disappeared. Whether the large animals became extinct from hunting or disease is still a matter of debate. The later stage Paleohunters made use of smaller game and deer, elk, and carabou using more lanceolate styles of stone points in many varieties. The era of the Paleohunter lasted from around 12000 till around 8000 years ago and was marked by changes in their style of living. They were no longer only hunters, but not yet farmers. New ways and new tools were invented. 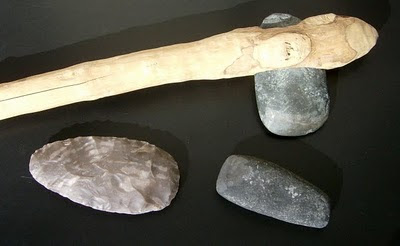 It is interesting the amount of pecked grooved axes and polished celts made from grainy hardstone in the Midwest. Having made of number of these I am hesitant to use them due to the considerable hours and effort invested. But, just as efficient to use, and taking only minutes to manufacture is the flaked flint axehead. Perhaps it comes down to the availability of the right type of stone. There are limited areas in Nebraska with flinty type stone suitable for tool making. Pictured above are several celts: a pecked Virginia greenstone in handle; at lower left, my newly made flaked flint celt; and to the right a basalt-like pecked celt artifact found in south central Nebraska. The lower picture is a 3/4 grooved stone axehead with a missing broken bit. This was found just inside my sisters basement wall, that was being repaired, in the middle of Fremont, Nebraska. 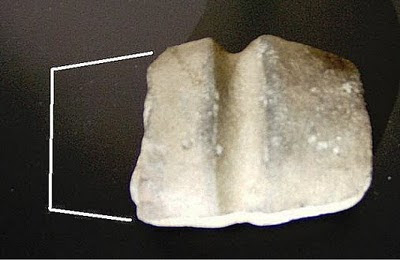 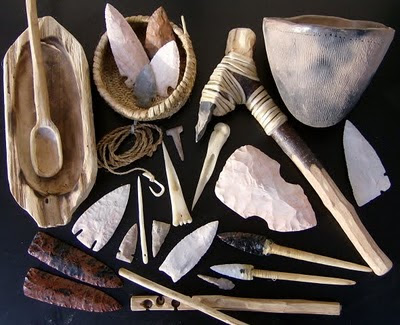 Primitive skills has intrigued me for decades...the fashioning of stone into cutting, chopping, scraping, and drilling implements. Twining fibers from the leaves and inner bark of plants forms cords and lines for fishing, hafting, and binding. Twirling wood upon wood grinds off heated particles of smoldering dust that is blown into flame. There is so much to learn and do. One area I feel drawn to is further learning the nature and uses of plants, particularly in the medicinal aspects. Having endured some minor illnesses I recognize how vulnerable we are without modern pharmaceuticals. This will be a new area of study this spring. (Pictured below are several small flint, chert, and obsidian knives I made this past week.) 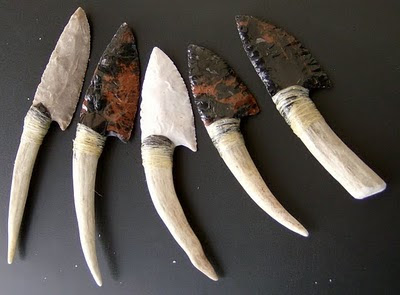