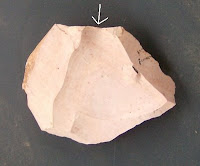 This is a continuation of the Flintknapping 101 series, if you look back thru past posts. I am trying to explain some of the strategies that come into play as you determine how to proceed at the stage of a large spall-using percussion, or a flake-using pressure. I am just trying to present some basic concepts, without writting a textbook...of which there are those much better qualified.

This spall is about 4-inches by 6-inches, and 1 3/4-inch thick. It had already been worked on when I recieved it. You can see where a large expanding flake had been struck off (Pic 1).

One of the side views (Pic 2) shows we have thick areas, top and bottom, to thin out. These slope to a thin sharp edge, seen at the lower left half. My initial thought picking it up was that it would make a nice chopper, fit in the hand well. The right hand side shows a squared edge, with a little cortex, that will have to be removed. 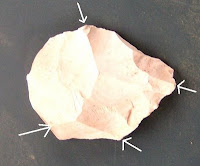 One of the principles is that- energy follows ridges (Pic 3). Look at any of the pictures, where ever you have a nice prominent ridge leading into the stone, this is a good place to intiate a fracture that will take off a nice flake-thinning the stone. A good strategy is to intially look for any ridges that lead to the high thick points of the spall first, to start thinning these areas first.

(Pic 4) Another concept that will become clearer as we go along is: centerline. This affects us in two ways. 1. As you work the piece, you want to move the edges of the rock up, or down, to the centerline. Hold an arrowhead on edge and you see that the edge follows a straight line back to tip...this is the centerline. 2. You can best strike, or push, flakes off of a stone from platforms that lie BELOW the centerline. The three "x" show possible platforms to use. If the edge lies above the centerline, as in edges to the upper right - flip the stone over. Now these lie below the centerline. Note: you are removing flakes off the bottom side of the stone while knapping.

(Pic 5) We have a squared edge on one side. To remove that we will use a process of alternate flaking. On the right hand side I will strike straight down (1). If you refer back to the post where we discussed the Hertzian Cone...rock fractures with a cone of approximately 100-degree angle. I will flip the rock over, and strike the angle left (2) from the first strike. Flip the rock and strike (3), repeating this process till my squared-edge is gone. In its place will be "zig-zag" edge. I'll show these actions in later posts.

Basically, this is a few of the mental exercises you automatically go thru when you pick up a potential piece and evaluate it. Probably another very important one would be: Begin with the end in mind. What do you want to make. With this piece I will initially make a preform. Basically, keeping the 6-inches length intact and eliminating about 1 1/2-inches of thickness in areas. It will look like a long ovoid thinning down to the edges. Early flintknappers would often make preforms at the quarry sites. They were lighter and easier to carry and could be modified, as needed, to spearpoints, knife blades, scrapers, adze blades, etc.
Posted by Mark at 8:23 AM